F1 at the Printers

I approved the final proofs for Dungeon Module F1 – The Fane of Poisoned Prophecies yesterday, and the first print run is now in progress!
It took a little longer than I had hoped to get through the proofing process, which means it won't have a February release. On the bright side, the print run will be finished very early next week, and I should be accepting orders and shipping at that time.
If all goes well, the next post here will include details on how to order!
Posted by Guy Fullerton at 9:36 AM 1 comment:

I picked up the proofs for The Fane of Poisoned Prophecies today! It was pretty exciting to see production-quality physical copies of the module: Three sets of the interior pages, plus a half dozen covers in a variety of different coatings.
I finalized the pesky cover stock & coating details that were plaguing me last week, which is great. Unfortunately, the proofs revealed couple things that need to be fixed before the final copies are printed. (I should say, "fortunately," because that's what proofs are for: Finding the unforeseen layout or production issues before you print a ton of product. So the proofs did their job.)
Because of the holiday, I won't be able to get new proofs (to verify the fixes) until the end of next week at the earliest, which means the final printing can't begin in earnest until the week of February 23rd, and that assumes I won't need a third cycle of proofs.
So The Fane of Poisoned Prophecies is still on track for a February release, but only just barely.
In other news, I'm investigating what it will take to produce content for another roleplaying game that is neither a flavor of D&D, nor a clone or simulacrum...
Posted by Guy Fullerton at 11:56 PM No comments: 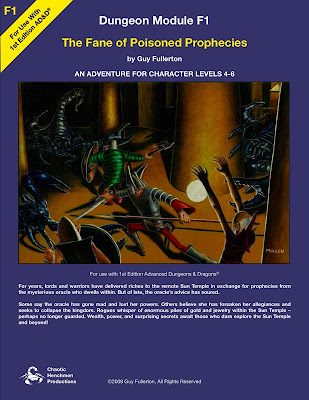 Peter Mullen's front cover illustration looks amazing! Click on the cover image above for a larger view. The release of Dungeon Module F1 – The Fane of Poisoned Prophecies just got a lot closer. I'm still talking with the printers about a few details, but I hope to have printed copies in my hands next week (knock on wood!), and I'll start to take orders shortly after that. Stay tuned...
©2009 Guy Fullerton, All Rights Reserved
Posted by Guy Fullerton at 9:21 PM 3 comments:

I want to help you Self-Publish!

Do you have a module or dungeon you'd like to self-publish? Do you want it to have an authentic old-school cover that reminds you of S4, B1, or G1 (mono)? Do you want an impressive, clean and functional interior layout?
I am looking for old-school gaming content to produce. If you have modules or supplements that need editing, layout, or high-quality cartography, please contact me.
I can produce great-looking, professional results in a variety of formats that are ready for immediate customer download as well as print on demand. Samples available on request. If you are trying to generate professionally printed product, I can help facilitate that too, by getting stuff printed at the local print shop – the same one I use for the physical product that Chaotic Henchmen Productions will soon be selling.
I'm interested in helping with both free and for-profit products. For free products, in exchange for the work, I ask for credit (to both myself and Chaotic Henchmen Productions) for any work done, as well as right to advertise the product on the Chaotic Henchmen Productions web site. You keep the copyright. My rates for profit projects are flexible based on need.
Posted by Guy Fullerton at 3:21 PM No comments:

This preview for Dungeon Module F1 – The Fane of Poisoned Prophecies is another preliminary illustration, this time a full-color cover illustration by Peter Mullen. When it's finished, it will be filled with more gorgeous color, and Peter may make a minor change or two as necessary. 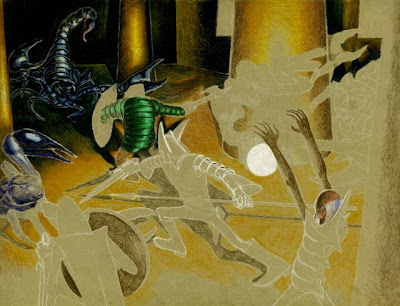 I'll have to let the picture do the talking this time, because a blurb from the room description would be a spoiler. The warrior in green better watch out; he's about to be surrounded by giant scorpions! I hope the magic user's spell is potent!
©2009 Guy Fullerton, All Rights Reserved
Posted by Guy Fullerton at 5:37 PM No comments: