F1 – The Fane of Poisoned Prophecies (back cover) 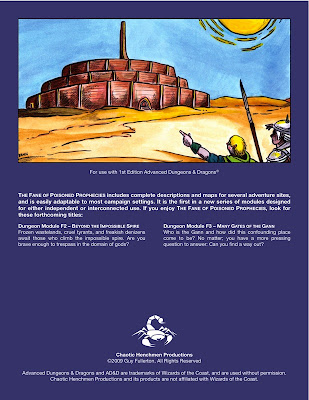 Our first product is Dungeon Module F1 – The Fane of Poisoned Prophecies, a 24 page 1st edition AD&D® module for character levels 4-6. From the front cover:

For years, lords and warriors have delivered riches to the remote Sun Temple in exchange for prophecies from the mysterious oracle who dwells within. But of late, the oracle’s advice has soured.
Some say the oracle has gone mad and lost her powers. Others believe she has forsaken her allegiances and seeks to collapse the kingdom. Rogues whisper of enormous piles of gold and jewelry within the Sun Temple – perhaps no longer guarded. Wealth, power, and surprising secrets await those who dare explore the Sun Temple and beyond!

The back cover (click on the preview above) features a color illustration by Jason Braun, who is also one of the interior artists. Look for more art previews later in the week.
Although it contains a backstory for the DM to use (or not!), The Fane of Poisoned Prophecies doesn't foist a plot on the players. The adventure environment allows for a wide variety of possible character motivations and goals, so the "plot" of the module is whatever the characters make of it. It offers the potential for fighting, exploration, interaction, puzzle solving, and more, so it should provide just as much fun for Chaotic Evil characters as it does for Lawful Good ones. It's written with many old-school sensibilities in mind, but it can be easily adapted to new-school play styles.
Like any 1st edition AD&D® module, it is largely compatible with 2nd edition, the basic game, the original game, as well as the various clones and simulacra.
Details: 24 pages, saddle stitched, with full-color cover and black & white interior
Author: Guy Fullerton
Availability: February 2009
AD&D is a trademark of Wizards of the Coast, and is used without permission.
Chaotic Henchmen Productions and its products are not affiliated with Wizards of the Coast.
Posted by Guy Fullerton at 10:48 PM